Boy, it's been a while since I've checked in. Late Merry Christmas & Happy New Year!
The concert with the choir went fine, at the last minute I volunteered to sing a duet with the soloist. She was having a little trouble. I don't blame her, the song was difficult. Even with both of us singing together we still messed up! But no one but the people who knew the song noticed (I hope).

I guess it's still possible to get shaky up on stage no mater how many times you've sung something! I sang on Sunday morning (Oh Holy Night) and I was a bundle of nerves. I had to switch hands with the mic because I was shaking so badly. I really thought I flubbed the whole song but everyone I talked to loved it (the singing not the shaking). Go figure.

We saw this really interesting film on tv last night. It was a series of half an hour clips about channeling, false teachers, the catholic church uniting religions, evolution and its ties to communism/Hitler. (We saw one of our favorite Creationist, Dr. Kent Hovind!) Evolution tells us some people are higher (or 'more evolved') beings than other people. So killing another race you believe is lower is not wrong in the eyes of the evolutionists. We believe that God made all men equal! So in essence evolution is the reason we have racism.

composed by Carolj at 11:26 AM No comments:
Newer Posts Older Posts Home
Subscribe to: Posts (Atom) 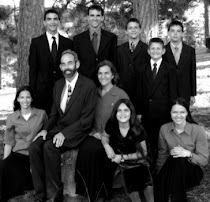